I have Cystic Fibrosis and received a double lung transplant at Harefield in April 2013. I joined the club in 2015 and became a committee member after my first AGM in Witney in 2015. I was appointed Chairperson at the AGM in Bournemouth a year later. I strive to make the club stronger, more accessible and work together with other organisations to promote organ donation so others get a new lease of life.

I  had a double lung transplant in September 2013 due to Cystic Fibrosis. I have been on the committee since   the AGM in Oxford in 2015 and took on the role of Vice Chair in October 2019.  I am also the hospital representative for the European Heart and Lung Transplant Championships.

I had a double lung transplant in August 2013, as a result of CF, and have been a member of the club for a year. I joined the committee at the  AGM in Bournemouth in 2016 and took on the role of Secretary in 2018

I have been a member and supporter of the club since 2005, I had a double lung transplant in October 2003 due to CF. I joined the committee at the AGM in 2015.

I’d had and LVAD for about 18 months when I received my last call for a heart in June 2018. I joined the committee after the 2019 Harefield reunion as I wanted to contribute, when possible , to a fantastic club. I took over the role of  Team Manager from Janka for the BTG 2021 and 2022. Now I have taken over the role as Treasurer ensuring the club accounts are correct and the club keeps in good financial order.

I joined the club in 2015 with my husband, Douglas Forbes, 2 years after his lung transplant. I am a keen supporter of Team Harefield at the British Transplant Games and have taken on the role of Newsletter Editor. My main role is the layout and design of the Newsletter.

I had a single lung transplant in 2008 as I have lymphangioleiomyomatosis or LAM for short. I have previously served on the LAM Action committee and am excited to be able to take on a key role in the Harefield Transplant Club. My main role is creating content for the newsletter and liaising with members directly to support them in their contributions.

I had a double lung transplant in 2017 due to Cystic Fibrosis, and first went to a British Transplant Games in 2019 in Newport. I went again in 2022 where Caroline asked me to take on her role as Team Manager for future games, I’m really looking forward to it as I’m really passionate about using the Games to help people recover from and enjoy life after their transplants. 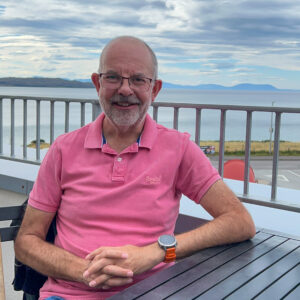 I had a heart transplant in October 1984, aged 12. My earliest involvement with the club was preventing several members of the Harefield transplant team attending one of the first club annual dinners as I was keeping them busy in theatre! I joined the committee at the 2022 AGM and I’m hoping to use my long-term knowledge as a patient alongside my professional experience to help the committee with the club’s mission to support pre and post transplant families however I can.

I worked at Harefield from 1998 to my early retirement in 2018, and have been an active member of the Club for many years. I joined the Committee in< 2020 and my main role is to lead on arranging the reunion and other social events .

I had a Double Lung transplant 14 years ago at Harefield Hospital and currently waiting for a Kidney Transplant. I joined the committee in Dec 2021 as I am hoping I bring many skills to the role as a general member on the Committee. During the various lockdown and this pandemic, I have felt very lonely and socially isolated whilst trying to keep ourselves safe. I am excited to be able to bring my experiences and knowledge to the Harefield Transplant Committee to help many other patients and families who have felt lonely or continue to feel lonely.