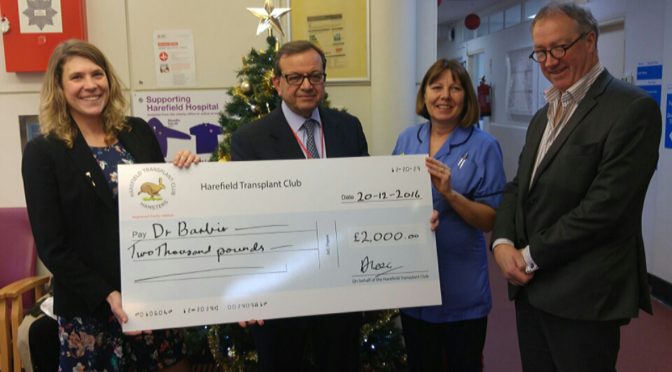 Thanks to all our busy fundraisers, sponsors and  donors we were able to present a cheque of £2,000 to Dr Barbir at Harefield Hospital.

It was an honour to meet the clinical lead on detection of genetic familial hypercholesterolaemia who was absolutely over the moon about the generous donation. Chair of the Harefield Transplant Club, Janka Penther said “I am incredibly proud that we can support this as it will save lives in the future and instead of needing a transplant patients can just take a pill with little side effects and have a near to normal life.”

About one in 250 people has familial hypercholesterolaemia (FH), an inherited condition that means their cholesterol levels are higher than normal from birth. It’s caused by an abnormal gene and, despite it putting people at high risk of early heart disease, most of them don’t even know they have it.

People with FH have a much higher risk of heart disease because they have had high cholesterol for so much longer. Someone who is 40 with FH could easily have the heart attack risk of a 70 year old.

If untreated, about 50 per cent of men and 30 per cent of women with FH will develop coronary heart disease by the time they’re 55.

On average in the UK, one person a day with FH has a heart attack. About a third of people don’t survive their first heart attack, and many who do survive will have damaged hearts.

The good news is that a 2008 study part-funded by the BHF found that people with FH who are diagnosed and treated before they develop heart disease generally live as long as people who don’t have FH. So it’s really important to get diagnosed as early as possible.